The President tweeted that Greta has anger issues and she must manage it and go watch a movie with her friend.

So ridiculous. Greta must work on her Anger Management problem, then go to a good old fashioned movie with a friend! Chill Greta, Chill! https://t.co/M8ZtS8okzE

Replying to that Greta changed her bio on Twitter stating “a teenager working on her anger management problem. Currently chilling and watching a good old fashioned movie with a friend”.

This is not the first time she has changed her Twitter bio, there is a long history and she keeps repeating it.

Whenever any remarks are being made after her she mocks them by changing her bio in the exact same words she is being described with.

When Russian President Vladimir Putin described her “a kind but poorly informed teenager”, she changed her bio accordingly.

Mr Bolsonaro told journalists. “It’s astounding how much space the press gives this sort of pirralha.” 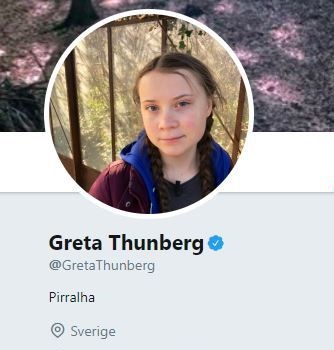