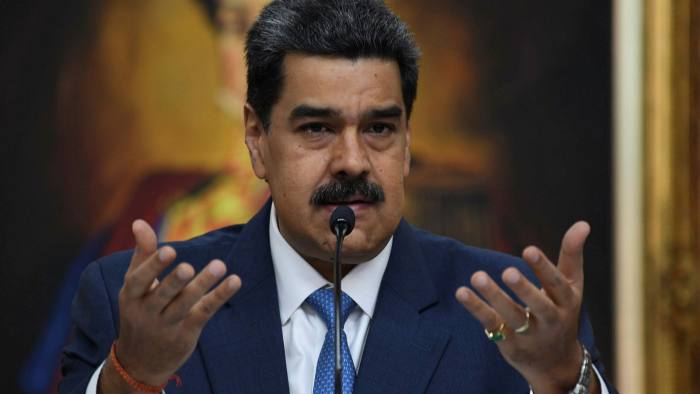 Federal Authorities of the United States have charged the President of Venezuelan, Nicolás Maduro, and other high authority members of the Venezuelan administration for narco-terrorism and drug trafficking.

The federal authorities of the United States were investigating on the Venezuelan President Maduro for years and unveiled him by Attorney General William Barr and other US federal officials during the press conference live streamed on Thursday.

Attorney General Barr, stated his remarks, that “Today’s announcement is focused on rooting out the extensive corruption within the Venezuelan government — a system constructed and controlled to enrich those at the highest levels of the government.”

Also, the State Department of the United States announces that they have offered $15 million as a reward or prize to those who bring us the information regarding President Maduro’s arrest.

President Maduro purportedly conspired along with dissident constituents of the FARC, Colombian revolutionary group for drug trafficking inside Central America and for flooding the US with drugs like cocaine, as per the charges that have been filed against him, in the Southern District of the state New York.

Venezuelan President Nicolās Maduro, whom the Trump administration does not accept as the president of the Venezuelan country, purportedly assisted in managing as well as lead the “Cartel of the Suns” to facilitate drug and narco-trafficking, as per the court papers.

President Maduro and other high post federal authorities of the Venezuelan, performing the operation by purportedly supplying the drug traffickers FARC along with rocket launchers, machine guns, and many other big weapons as well as assisting them by providing a safe and no restricted airspace to fly cocaine from Colombia inside Central America quickly. There were also many cocaine shipments sent by Colombia flown into countries like France and Mexico through cartels that were seized in the middle by these countries’ federal authorities, allegedly stated by the prosecutors.

When the first cocaine shipment seized in Paris by the authorities in 2013, President Maduro canceled his schedules to appear in the UN General Assembly and held a conference with his co-conspirators in order to scold them for utilizing the airways rather than their typical routes to supply the 1.3 tons of drugs. This drug-trafficking stratagem began back when President Maduro was working as a foreign minister for the country at the time of the Hugo Chavez regime, stated the prosecutors in court papers.

During that time, President Maduro easily accepted the amount of $5 million from FARC drug traffickers. After that, Maduro purportedly agreed to launder $5 million and all the other monetary benefits on behalf of the drug traffickers group, FARC.

Thus, President Maduro is under the charge of the federal for narco-terrorism and drug trafficking conspiracy.

With the passion to enhance my skills, I am creating a diversify content that helps me in improving my writings.
View all posts

With the passion to enhance my skills, I am creating a diversify content that helps me in improving my writings.