ISIS Leader Bagdadi “Believed to be Dead” in an Operation By US: Official 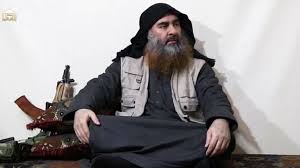 American authorities said that they led an operation against ISIS head Abu Bakr Al Bagdadi. It isn’t revealed if the operation was successful or not. A US armed force authority affirmed that Bagadi was killed in action. The news isn’t affirmed at this point with respect to when reached another US authority wouldn’t remark on the issue. The said operation occurred in the Syrian Idlib territory. US President Donald Trump likewise tweeted that “something big has just happened”.

Something very big has just happened!

It’s terrifying to hear this from a person with no impulse control who’s one KFC bucket away from using the nuclear codes.

If it’s big, we can rule out an erection then. Did you just find out you have a daughter named Tiffany? Did you tell Putin he could invade Canada so he has a buffer zone with the US? Did Mexico’s check for the wall finally arrive? Did you find Hunter Biden under Melania’s bed?

The wedding of the century?? pic.twitter.com/2witDzFonv