Wall Street futures took a toll overnight due to the coronavirus outbreak that has a significant impact on investors’ sentiments. Investors are affected by the potential global economic recession amid coronavirus issue, while an all-out price war for oil has added to their worries.

On the Dow Jones index, Futures fell 1,198 points, indicating an opening loss of 1246.78 points on Monday trading beginning. Apart from Dow Jones, other indexes like Standard & Poor’s 500 futures, and Nasdaq-100 futures also indicated a negative position on Monday opening. This fall is followed by a somewhat volatile market performance for four straight days, that saw the markets swing more than 2.5% up or down.

It is evident that amid the fear of coronavirus, causing the world business into a recessionary state, the investors are looking to stay on the safe side and avoid any risky prepositions. It must be noted that the said effect has also impacted other instruments as well, like, the 10-year Treasury note’s yield dipped below 0.5%, before recovering slightly at 0.524%. 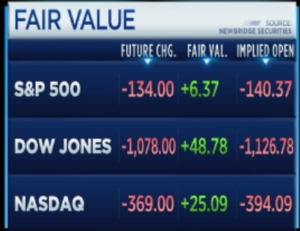 On the other hand, there was a positive indicator that the Federal Reserve may slash the interest rate by 75 basis points at the meeting scheduled this month. As per the CME FedWatch tracker, chances for this 75 basis point cut were around 80% on Sunday evening, while a 100 basis point cut stood at a probability of 38% as per this indicator.

Meanwhile, On Saturday, Saudi Arabia slashed the crude selling prices for April; it is seen as a reverse act from the previous decision to support the oil prices following the cut in global demands due to coronavirus. This move took effect after the OPEC deal failed on the last Friday.

As per Adam Crisafulli, founder of Vital Knowledge, markets are hit mostly by the effect of the OPEC deal failure. He stated “Crude has become a bigger problem for markets than the coronavirus,” He added “It will be virtually impossible for the [S&P 500] to sustainably bounce if Brent continues to crater,”

It must be noted that Wall Street players are already in a negative place regarding the Coronavirus outbreak, and the plague has been rapidly increasing and spreading. As of Sunday, the virus has lead to at least 3,801 deaths around the world, and a global number of infections has exceeded 109,000. Regarding the U.S., the virus has lead to state emergencies in the states of New York, Oregon, and California.

The Federal Reserve also announced an interest rate last week to tackle the economic impact from the virus; it was also marked as its first such move after the financial crises. Chris Rupkey, MUFG Union Bank’s CFE, said on Sunday “The idea that lower gasoline prices is going to put more cash in workers’ pockets and give consumer spending and the economy a boost doesn’t seem to cushion the blow for stock market investors,” “They want out. Big time. The sky is falling. Get out, get out while you can. Wall Street’s woes have to eventually hit Main Street’s economy hard.”

While the situation remains tight, it will be interesting to see what havoc does the coronavirus causes next, and the performance of the market and economy in the upcoming week.

Precautions You Should Take to Avoid Infection due to Coronavirus

Elon Musk Donated 1,000 and More Ventilators To LA Officials – Giving His Contribution In The Fight Against Coronavirus Pandemic

Doctor warns, Losing the sense of smell can be the new hidden symptom of coronavirus