Australian woman finds a terrifying python curled up inside the toiled pot in her bathroom. 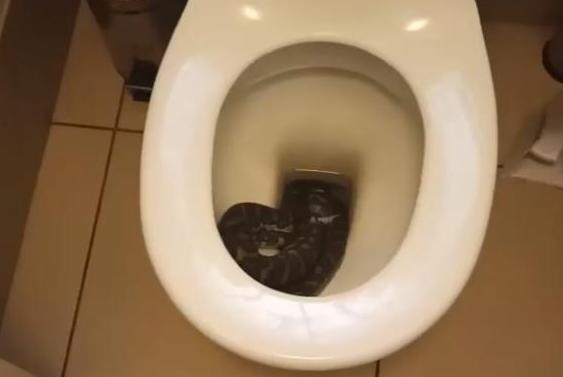 Nicole Errey found a python un her bathroom at her residence in Cairns, Australia. She said that she saw something “dark thing” inside the toilet seat when she went to the bathroom.

“I came in from work, went into the bathroom. I saw the toilet lid was open. I looked and saw a dark thing in the toilet (python) just stuck its head out,” she said. Nicole then contacted Cairns snake removals, and a professional snake handler Dave Walton removed the snake from the bathroom.

Now there’s something more to this story, Nicole’s sister was using the other bathroom at her residence as they were about to go out Nicole spotted another python in the toilet. Again Dave Walton was asked to help out, and he removed the python again.

Dave shared his snake rescuing images on Facebook saying, “Two nights in a row, I have been called to the same property for a snake in the toilet. Each time its been a Water python. In all my time, I have pulled several snakes out of toilets. But never 2 in 2 days at the same address. The 1st call snake was out of the toilet by the time I got there and upon the vanity. Lady advised me she watched it come out of the loo. Second call tonight snake is still sitting in the bowl.”

There have been many cases like this in the past when a reptile has crawled in the toilet bowls. Make sure you check out before you go. There was an incident where a python bit a man’s penis when he went in to use the toilet pot.