“There may already be tens of thousands of covid-19 cases in NY”, Andew Cuomo

Coronavirus is spreading like wildfire all over the globe; more than 220,000 people have been tested positive around the world. In states, more than 7000 people have been infected, including around 100 deaths. Amid this chaos, the governments all over the world are taking precautionary measures to tackle the situation. NY Official Andrew Cuomo disclosed interesting facts regarding coivd-19 on a CNN interview on Wednesday.

On Sunday, the US President also issued a set of guidelines to be followed by the citizen to avoid any further spreads of the covid-19 disease. Meanwhile, on Wednesday, New York Gov. Andrew Cuomo said it is most likely that there are already “tens of thousands” of cases in the New York state by residents who are not even aware of their disease due to the underlying symptoms being so common.

Now that more people are being tested, these tests are now “revealing more cases,” Cuomo said Wednesday on CNN’s “The Situation Room” with Wolf Blitzer. “I think it is much more widespread than any of these numbers suggest.” 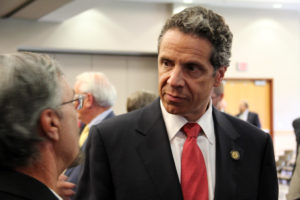 It must be noted that New York is by far the hardest-hit region in the States as it has the highest number of cases reported, with nearly 3,000 coronavirus cases. In response to this, the NY officials banned public gatherings of more than 50 people on Monday and also restricted the openings of bars, clubs, restaurants, and other such places to deal with the crisis.

He also pointed out his fear that the outbreak may push the hospitals to their maximum capacity, saying that the US is not yet ready to house all the patients during a pandemic.

Earlier that day, Cuomo announced that President Trump has agreed to provide a floating hospital to assist the state in managing the current coronavirus situation. Cuomo also doubled the projections for the demand for hospital beds and the hospitalization rate from what he projected on Tuesday when he estimated that the state needs 55,000 beds. The rate of hospitalization was 19%.

“Right now, in New York specifically, the rate of the curve suggests that in 45 days we could have up to an input of people who need 110,000 beds that compares to our current capacity of 53,000 beds, 37,000 ICU units, ventilators, which compares to a capacity currently of 3,000 ventilators. That’s our main issue,” Cuomo said at a press conference in Albany.

In NY, Mayor Bill de Blasio also said that he is currently pushing Cuomo to approve a “shelter-in-place” order for the city, similar to the one implemented in Northern California earlier this week.

In the interview, Cuomo spoke about this conversation he had with the mayor, saying he’s not in favor of “quarantining the city or imprisoning people.”

Shelter-in-place “is a little deceptive,” he said. “It sounds like you are imprisoned in your home, but that’s not actually what it is.“ “People can go to the doctor and exercise outside,” he said.

Americans Will Need At Least A Year To Recover From Coronavirus Fully, Bill Gates

How to Reuse and Clean your N 95 Mask